Everything You Need To Know About Iconic Atal Bridge 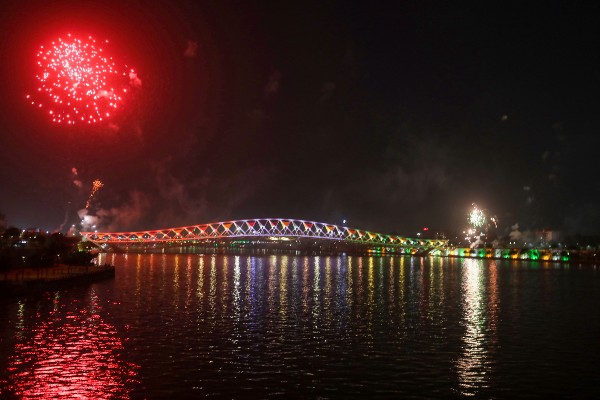 Atal Bridge, a FOB(foot-over bridge) on the Sabarmati river in Ahmedabad, Gujrat, was inaugurated by Prime Minister Narendra Modi on August 27.

This pedestrian-only bridge is now open to the public visit. The Atal Bridge, a steel bridge named after former PM Atal Bihari Vajpayee, has a unique design which is complete with LED lighting.

The foot-over bridge will help connect the eastern and western ends of the Sabarmati river. Atal Bridge, the FOB, was approved by the Sabarmati Riverfront Development Corporation Ltd (SRFDCL).

Atal bridge is about 300 meters long and 14 meters wide. It is built using 2,600 metric tonnes of steel.

Atal Bridge design is inspired by Kite Festival organised in the city. Its roof is beautified with colourful fabric, and the railing has been built with glass and stainless steel.
It also consists of a flower garden on the western end, and an art and culture centre is coming up on the eastern end.

The Sabarmati river is one of the major west-flowing rivers in India. It originates in the Aravalli Range of the Udaipur District of Rajasthan and meets the Gulf of Khambhat of the Arabian Sea in a south-westerly direction after travelling 371km across Rajasthan and Gujarat.

Who built the Atal Bridge?

The Atal Bridge, a pedestrian-only bridge, has been built by the Ahmedabad Municipal Corporation.

Where is the Atal bridge?

Atal Bridge is located on Sabarmati Riverfront in Ahemadabad.

How much did Atal Bridge cost?

It cost 74crore rupees on the pocket of taxpayers.

The entry fee for Atal Bridge is 30 rupees for 30 minutes. 12 years and 59 years of age have to pay Rs 30 while children below 12 & Senior citizens above 60 have to pay 15 rupees. However, it is free for the person with disabilities.

What is the timing to visit Atal Bridge, Ahmedabad?

The Atal Bridge will remain open from 9 am to 9 pm for pedestrians.

What is the length of Atal Bridge, Ahmedabad?

What is not allowed on Atal bridge Ahmedabad?

How much steel is used in the making of Atal Bridge Ahmedabad?

2,600 metric tonnes of steel pipes are used in the making of Atal Bridge Ahmedabad.