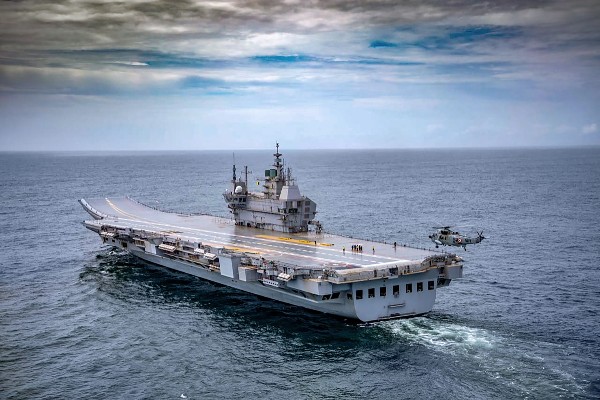 Landing trials of INS Vikrant will begin in November and will be completed by mid-2023, adding MiG-29K jets will operate from the warship.

The INS Vikrant aircraft have been manufactured in 18 states and union territories, including Kolkata, Pune, Delhi, Ambala, Jalandhar, Kota, Hyderabad and Indore.

The warship is 262 metres long and 62 metres wide, with a height of 59 metres. Its construction began in 2009.
Vikrant has a top speed of around 28 knots and a cruising speed of 18 knots with an endurance of about 7,500 nautical miles.

The project was implemented under the three phases of a contract between the ministry of defence and Cochin Shipyard Ltd, starting from May 2007. The ship’s keel was laid in February 2009.

It includes specialised cabins for women officers and sailors. It has a medical complex with the latest equipment, including several laboratories, a CT scanner, X-ray machines, and an isolation ward.
Vikrant has a primary medical complex, and we have more than 40 compartments spread over the entire ship. It has a 16-bed hospital with all the facilities.

Becoming self-sufficient in core technologies remains the real challenge. But India is working hard on it.
However, India is exploring collaboration with foreign defence majors to co-produce the latter’s engines.

Meanwhile, the Navy’s ships rely on power plants designed by foreign firms. And India is again hunting for a foreign conventional submarine design, despite the Make in India Scorpène initiative.

Importance of INS Vikrant; Even more when it is made in India

The Navy has taken delivery of the IAC-1, which will be named ‘INS Vikrant’ after India’s beloved first aircraft carrier after commissioning. An aircraft carrier is a core component of the Navy, and India has now joined a small club of nations that can build these elite warships.
The timing happens to be crucial when China is building up its presence in the Indian Ocean region.

The new warship is comparable to India’s existing carrier ‘INS Vikramaditya’, which is a 44,500-tonne vessel and can carry up to 34 aircraft, including fighter jets and helicopters. INS Vikrant produces 88 MW power and features 2,300 compartments designed for a crew of around 1,700 people. Vikrant has a top speed of around 28 knots and a cruising speed of 18 knots with an endurance of about 7,500 nautical miles. The Navy said the ship is powered by four gas turbines totalling 88 MW.

When will INS Vikrant be commissioned?

The commissioning of the country’s first aircraft carrier, Vikrant, will enhance peace, security and stability in the Indian Ocean and Indo-Pacific Region. The carrier is set to be commissioned on September 2, 2022, in the presence of Prime Minister Narendra Modi.

Vikrant is powered by four General Electric LM2500+ gas turbines on two shafts, generating over 80 megawatts (110,000 hp). The gearboxes for the carriers were designed and supplied by Elecon Engineering.

How many INS does India have?

At present, India has only one aircraft carrier, INS Vikramaditya, which is built on a Russian platform. Defence forces have been seeking three carriers in all – one in spare besides one each for the two main naval fronts, in the Indian Ocean and Bay of Bengal.
Built at the cost of ₹ 20,000 crores, it was designed by the Navy’s Warship Design Bureau and built by the public-sector manufacturer Cochin Shipyard Limited. With it, India joins a select group of nations, such as the US, UK, Russia, China and France, that can design and build aircraft carriers.

INS Vikramaditya is a modified Kiev-class aircraft carrier and the flagship of the Indian Navy, which entered into service in 2013.
India has only one aircraft carrier, INS Vikramaditya, which is built on a Russian platform. Defence forces have been seeking three carriers in all – one in spare besides one each for the two main naval fronts, in the Indian Ocean and Bay of Bengal.

Originally built as Baku and commissioned in 1987, the carrier served with the Soviet Navy and later with the Russian Navy (Admiral Gorshkov) before decommissioning in 1996. The carrier was purchased by India on January 20 2004, after years of negotiations at a final price of $2.35 billion

INS Vikrant, also known as Indigenous Aircraft Carrier 1 (IAC-1), is an aircraft carrier constructed by Cochin Shipyard Limited (CSL) for the Indian Navy. It is the first aircraft carrier to be built in India.

The name Vikrant means “courageous”. The ship’s motto is “Jayema Saṁ Yudhi Spr̥dhaḥ”, which is taken from Rigveda and means “I defeat those who fight against me”.