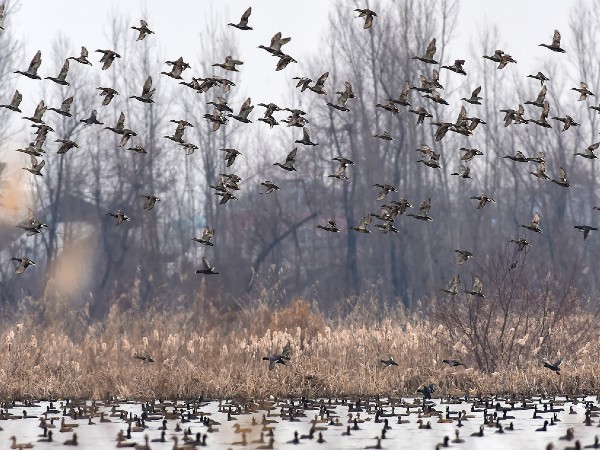 On being asked in the Parliament about the current number & condition of Ramsar sites, the data was provided by the Ministry of Environment, Forest and Climate change in November 2021. At that time India was having 46 Ramsar sites which have now extended to 49 sites. On February 2, 2022, two new Ramsar Sites were added to the list named as Khijadiya Wildlife Sanctuary in Gujarat and Bakhira Wildlife Sanctuary in Uttar Pradesh.

Further, efforts are being taken to declare Pallikaranai Marshland as ‘Ramsar Sites’ by Karnataka state Government.

What is Ramsar Site?

Ramsar sites are generally wetlands having International importance. Wetlands are areas where water covers the soil or is present either at or near the surface of the soil all year or for varying periods of time during the year.

The term Ramsar was coined when the International treaty for the Conservation and Sustainable use of Wetlands was signed in the city of Iran called Ramsar in 1971 by UNESCO which came into force in 1975. February 2 is celebrated as International Wetland Day as the Ramsar Convention was signed on February 2, 1971.

The Wetland Conservation and Management Rules, 2017 notified by the Union Ministry of Environment, Forest and Climate Change gives the definition of Wetlands as, “An area of Marsh, fen, peatland or water; whether natural or artificial, permanent or temporary, with water that is static or flowing, fresh, brackish or salt, including areas of marine water the depth of which at low tide does not exceed six meters, but down not include river channels, paddy fields, human-made water bodies/ tanks specifically constructed for drinking water purposes and structures specifically constructed for aquaculture, salt production, recreation, and irrigation proposes.”

The aim of the Ramsar convention was to conserve wetlands and promote sustainable use of their natural resources. There are around 2,400 Ramsar Sites worldwide and the Cobourg Peninsula, Australia is known as the first Ramsar site, identified in 1974.

The country with the highest number of Ramsar sites is the United Kingdom with 175 sites followed by Mexico with 142 Ramsar Sites. Globally, Wetlands cover 6.4% of the geographical area of the world. Bolivia has the largest area with 148,000 sq km under the Convention protection. Canada, Chad, Congo, and the Russian Federation have also each designated over 100,000 sq km.

India has South Asia’s largest network of Ramsar sites with 49 wetlands spread over 10,936 sq km in 18 states and two union territories. Uttar Pradesh has the largest number of Ramsar sites which is 10, followed by 6 in Punjab, 4 each in Gujarat and J&K, 3 each in Himachal Pradesh and Kerala, 2 each in Haryana, Maharashtra, Odisha, West Bengal, Rajasthan, and 1 each in Andhra Pradesh, Assam, Bihar, Ladakh, Manipur, TN, Tripura, Uttarakhand, and MP.

India has 19 types of Wetlands. Sundarbans with 10,000 sq km of area is known as the largest Ramsar site in India while Renuka Wetland, Himachal Pradesh with an area of 20 hectares is the smallest wetland in the country.

Chilka lake, Orissa and the Keoladeo National Park, Rajasthan are the first Wetlands of India recognized under Ramsar Convention as the first Ramsar sites of India on October 1, 1981.

Here is the list of 49 Ramsar Sites in India